Our team is always looking for things we think our readers will value. We have received compensation for publishing this article.

Ghostery Midnight is available for Microsoft Windows and Apple Macintosh 10.13+ devices with mobile apps planned for later this year.

Ghacks users get 1 month of its Premium tier free by using the coupon code GHOSTYHACKS and this link to sign-up.  Credit card information needs to be provided before the discount code can be applied, but you can cancel at any time. After your trial period, the monthly subscription would cost $14 per month. 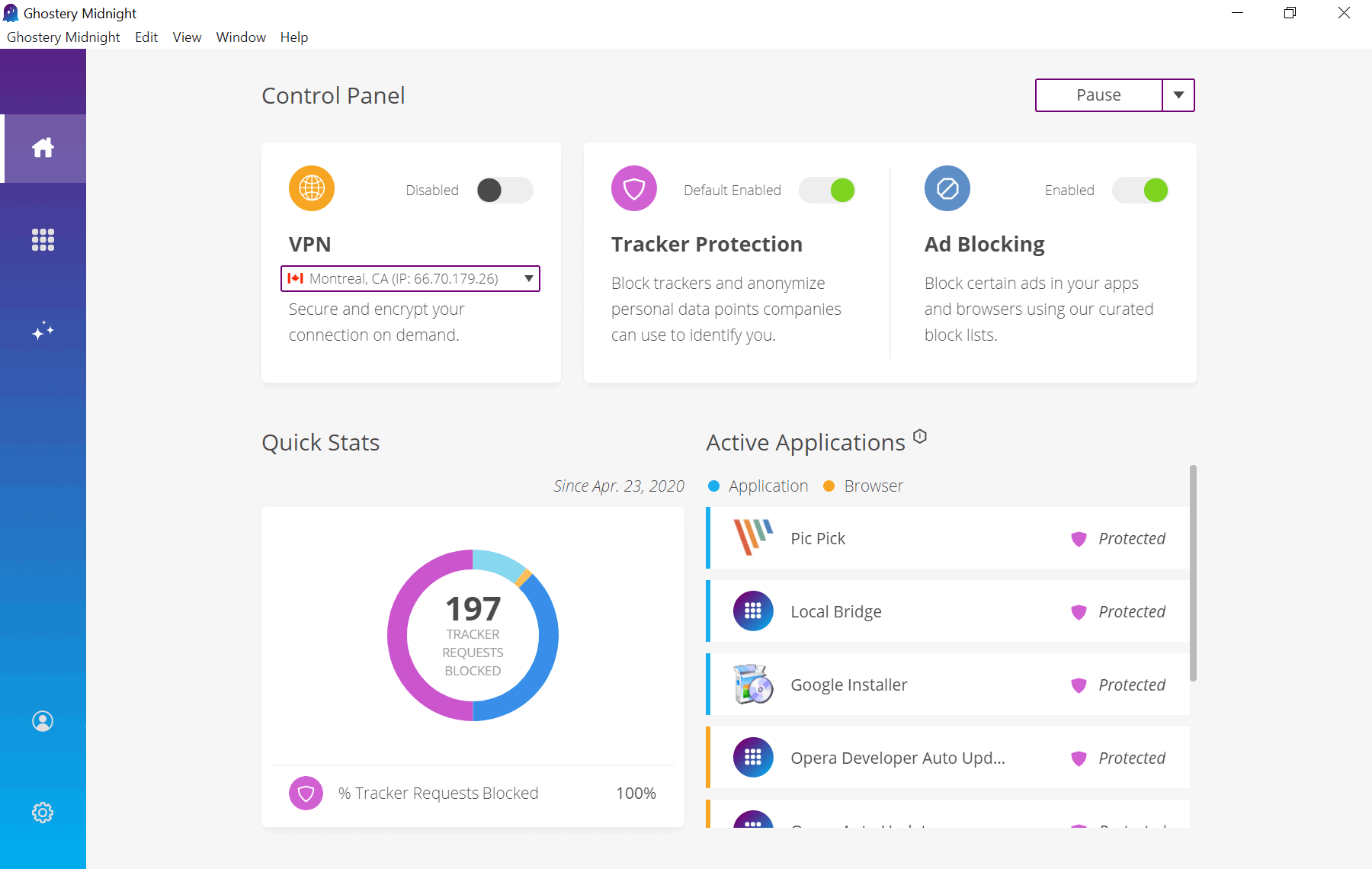 In other words: you get effective tracker blocking and ad-blocking the moment you have installed the application on the device; these can be turned off but most users may want to keep these enabled as they provide system-level protection (similarly to HOSTS file protections and other system-wide options). Ghostery uses a curated list of trackers and advertising servers that is updated regularly.

The Home screen of the application displays the status of the three core features -- VPN, Tracker Blocking and Ad-Blocking -- statistics about blocked trackers, and the applications that run on the system that are protected by the program's features. A quick test in several browsers and other system programs showed that ads and trackers were blocked effectively using the program.

One interesting feature is the option to select any of the applications to check out the number of blocked trackers and ads associated with it. While you may get the information for browsers if you use a blocker in them, you usually don't get them for programs that you cannot install ad-blocking extensions in.

A click on the excellent screenshot tool PicPick for example shows that it is using Google Analytics, and that Ghostery Midnight blocked these connections. The list of blocked connections is broken down into categories like Site Analytics, Social Media, or Advertisers. 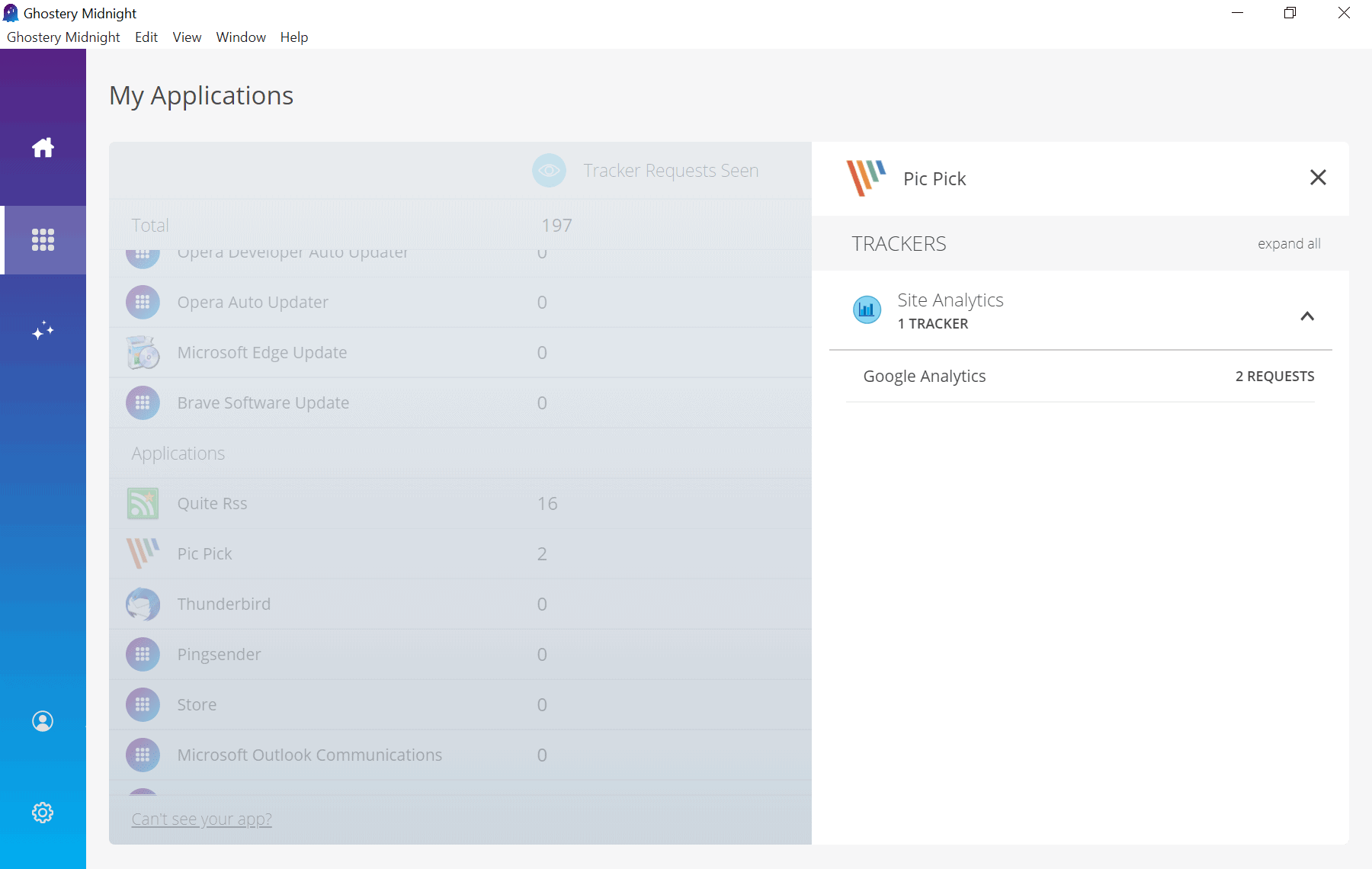 You may find similar information for other programs that you ran on the device. Even system programs appear to be protected by the application.

A click on the My Apps section in the sidebar displays statistics for all applications. You find the number of blocked trackers and advertising servers for each application listed there plus options to whitelist an application or set it to monitoring only. 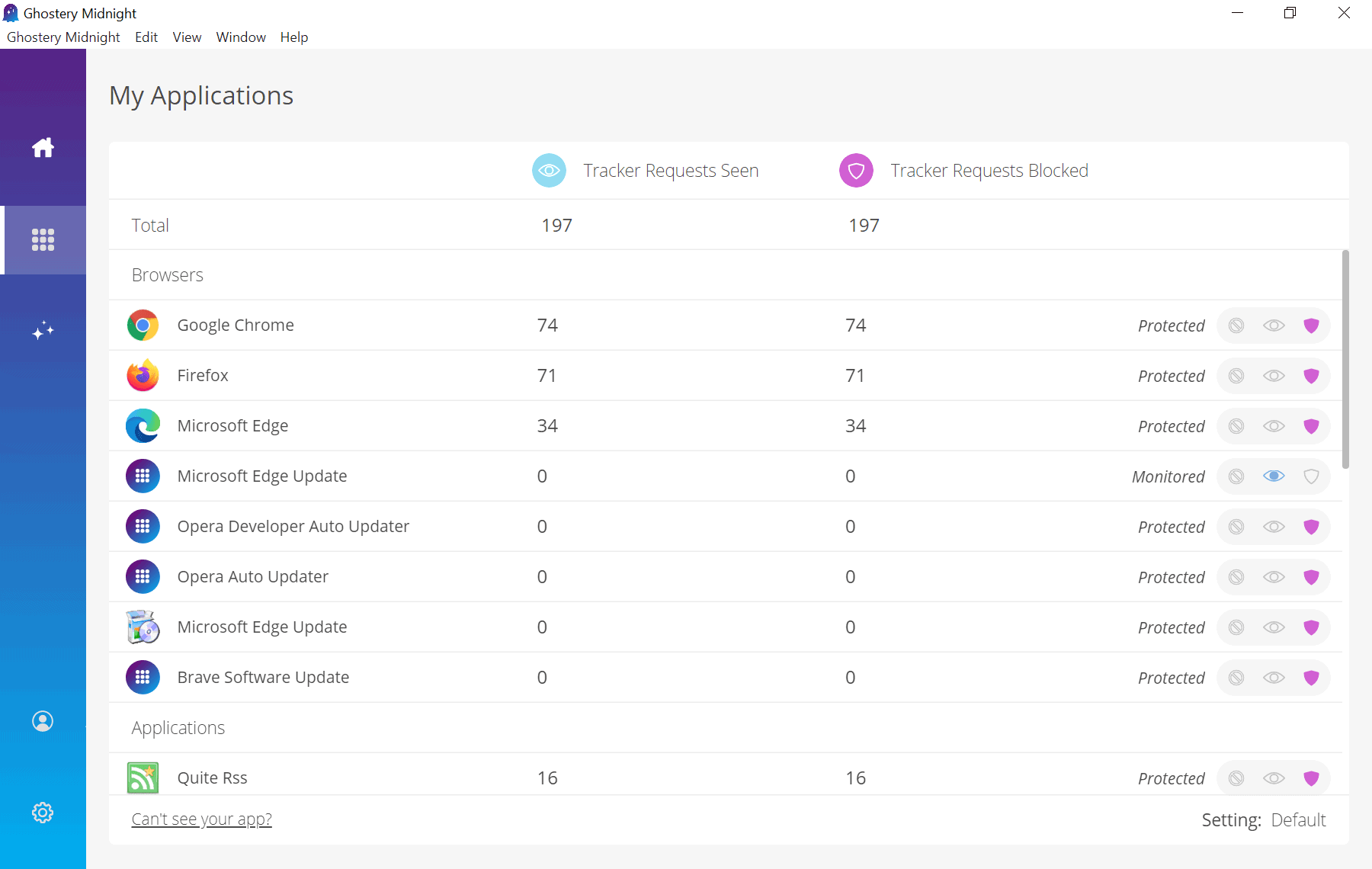 Ghostery Midnight users may use the application to connect the system to VPN servers to get protection on that front as well. A VPN protects the Internet connection and hides the device's IP address as well; this improves privacy but also security in some regards.

You may connect to several locations using the program including Germany, the United States, Canada, and the UK. Connections worked as expected. All you do is toggle the VPN connect option to connect to the selected server. You may switch between servers on the Start page.

The list of servers, all physical and non virtual, is relatively low when compared to other services. Ghostery plans to increase the number of supported regions and servers in the future. Ghostery does not store any network logs and the only data that is logged is bandwidth use in order to manage and improve network performance. IP address information is not collected or stored.

Ghostery Midnight is also planning on several interesting updates. The next planned one introduces a Plus tier which falls between its Free and Premium tier, allowing users to take advantage of Midnight’s system-wide tracking without the VPN. Ghostery also has plans to release in the coming months a feature called Live Traffic which allows users to monitor all network activity and report new trackers.

Ghostery Midnight blocks trackers and advertising in all applications and programs that run on a system, and allows users to connect to VPN servers to protect their online activities as well both in regards to privacy and security.

Ghostery Midnight is giving you the chance to win TEN 2-months free subscriptions and ONE 1-year free subscription. Sign up here (by leaving your email address) to participate in the raffle.

This Day in History

Ghacks is a technology news blog that was founded in 2005 by Martin Brinkmann. It has since then become one of the most popular tech news sites on the Internet with five authors and regular contributions from freelance writers.